What does Valentina mean?

[ 4 syll. va-len-ti-na, val-ent-ina ] The baby girl name Valentina is pronounced Vaa-LehN-TIY-Naa in Italian or Vaa-LiyN-TIY-Naa or Vaa-LYehN-TIY-Naa in Russian †. Valentina has its origins in the Latin language. It is used largely in Czech, English, German, Italian, Spanish, Russian, and Slavic. It is derived from the word valens which is of the meaning 'healthy, strong'. From the Roman nickname.

Valentina is a form (Italian, Russian, and Slavic) of the French and English Valentine.

Valentina is the feminine version of the English Valentine.

The name Valentina is used to a great extent; it has 34 forms that are used in English and foreign languages. English forms of the name include Teena, Teina, Tena, Valantina, Valeda, Valen, Valena (used in German too), Valensia, Valenteana, Valenteen, Valenteena, Valentena, Valentijn, Valentin, Valentinah, Valentya, Valentyn, Valentyna, Valentyne, Valera, Valida, Valina, Valja, Valle, Valtina, Valyn, and Velora. Other English variants include the contracted forms Val and Valene, and the familiar form Valli.

Valentina is popular as a baby girl name, and it is also regarded as trendy. The name has been increasing in popularity since the 1990s; prior to that, it was of only very modest use. At the recent height of its usage in 2018, 0.185% of baby girls were named Valentina. It was #81 in rank then. Within all girl names in its family, Valentina was the most widely used in 2018. 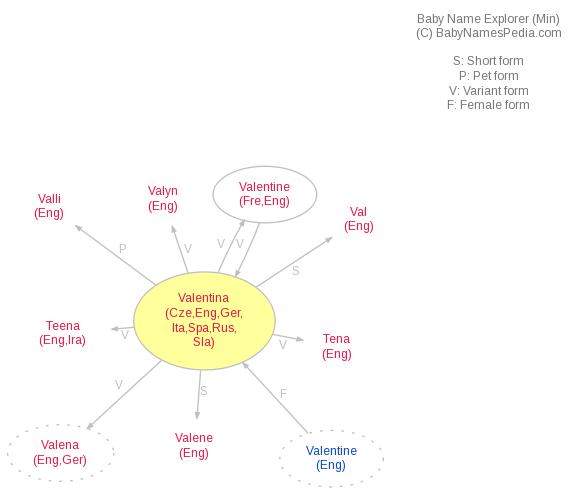