What does Valentine mean?

[ 3 syll. va-len-ti-ne, val-ent-ine ] The baby boy name Valentine is sometimes used as a girl name. Its pronunciation is VaeL-ehNTIY-N or VAEL-ehNTayN †. Valentine is an English name of Latin origin. The first name is from the Roman nickname Valentinus (Latin), which is ultimately derived from the Latin 'valens' (meaning healthy, strong). The name Saint Valentine was borne by various saints of ancient Rome, most notably the 3rd century martyr who was imprisoned by Claudius II for marrying Christian couples who were being persecuted; he was eventually executed for trying to convert the emperor. His feast day is celebrated on February 14; it superseded an ancient pre-Roman pagan festival celebrated around the same time. The association of Saint Valentine and his feast day with romantic love was invented in 14th century England, notably through the works of Geoffrey Chaucer. The name Valentina (Czech, English, German, Italian, Spanish, Russian, and Slavic) is the female form of Valentine.

Valentine has 22 variants that are used in English and other languages. Variants used in English include Valentinian, Valentinus, Vallen, and Volentine. The short forms Val and Valen are other English variants.

Valentine is uncommon as a baby name for boys. At the modest height of its usage in 1903, 0.019% of baby boys were given the name Valentine. It ranked at #409 then. The baby name has since markedly fallen in popularity, and is today of very light use. Within the group of boy names directly linked to Valentine, Valentino was the most regularly used in 2018. Valentine has in the past century been mostly given to baby boys. In 1917, the name Valentine was given to 2 times as many baby boys than girls.

Baby names that sound like Valentine include Valentijn, Valentin, Valentyn, Valentino, and Volentine. 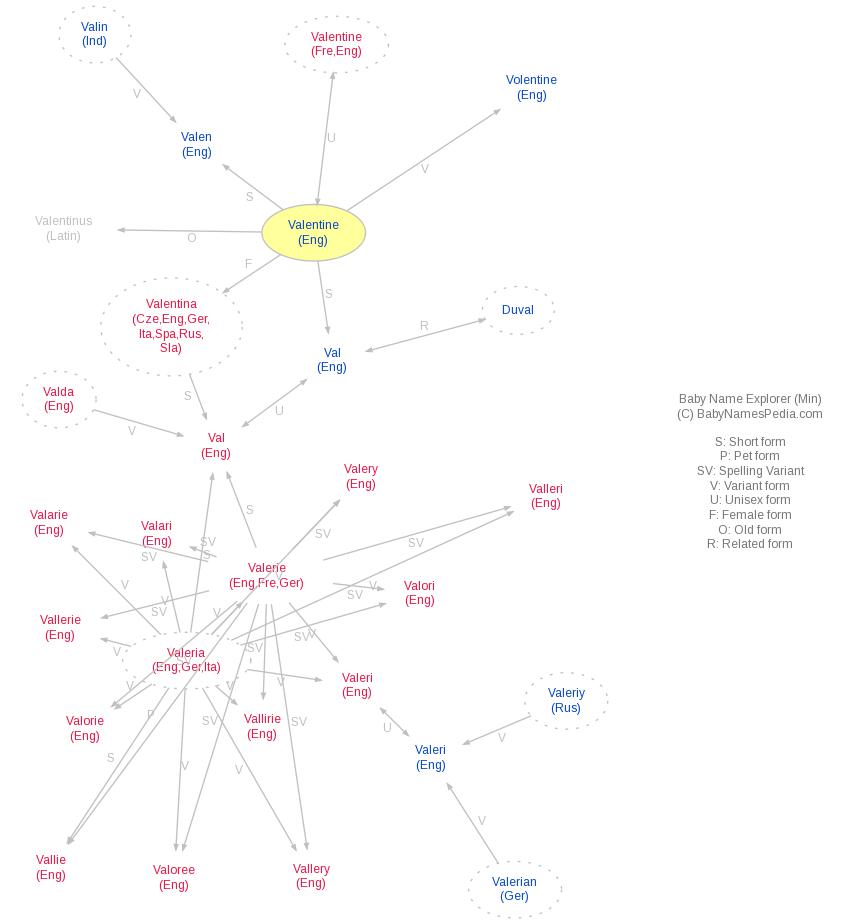