What does Valeria mean?

[ 3 syll. va-le-ria, val-er-ia ] The baby girl name Valeria is pronounced Vaa-LEY-RYaa (Italian) or Baa-LEH-RYaa (Spanish) †. Valeria's language of origin is Latin. It is predominantly used in English, German, and Italian. The name Valeria means 'healthy, strong'. It is derived from the word valere which is of the meaning 'be healthy, be strong'. An old form of the name is Valeria (Latin). The name Valeria was borne by a celebrated Roman clan which remained prominent for a long period. It was also borne by the 1st-century Saint Valeria of Milan, who was martyred for burying Christian martyrs. The name was first adopted by English speakers as Valeria in the 17th century; in the late 19th century, the French form Valerie was more popular. Valeria is the feminine version of the German Valerius. 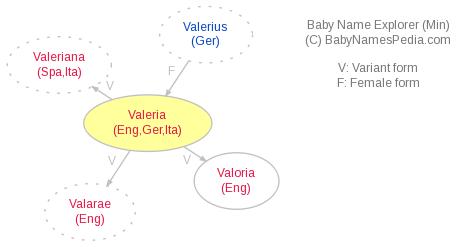