What does Van mean?

[ 1 syll. van, va-n ] The baby boy name Van is sometimes used as a girl name. Its pronunciation is VaeN †. Van is used chiefly in the English language, and its origin is Celtic and Old English. The name is of debated origin; it could have first developed from Vance or Ivan. As a surname prefix, it means 'of' or 'from' in Dutch.

In addition, Van is a variant of the name Donovan (English and Irish) in the English language.

Van is also a pet form of the name Evan (Scottish, English, and Welsh) in the English language.

Van is also a contraction of the name Ivan (Belorussian, Czech, English, Russian, Slavic, and Ukrainian) in the English language.

Van is also a contraction of the name Vance (English).

Vann (English variant spelling) is a form of Van.

Van is a classic favorite. At present it is still a somewhat popular baby name for boys, though not to the extent it was before. In 1900, 0.035% of baby boys were given the name Van. Its ranking then was #273. The baby name has since suffered a steep fall in popularity, and is of irregular use in recent years. In 2018, its usage was only 0.014% and its ranking #827. Out of the group of boy names directly linked to Van, Evan was the most popular. In 2018, its use outnumbered Van's by 16 times. In the past century Van has predominantly been a baby boy name. 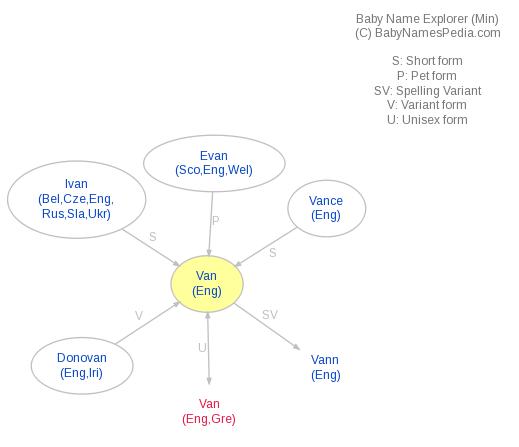