What does Vanessa mean?

[ 2 syll. va-nes-sa, van-e-ssa ] The baby girl name Vanessa is pronounced Vaa-N-S-aa- †. Vanessa's origin is Latin, and its use, English and German. The name was first invented by the Irish poet Jonathan Swift (1667-1745) as a nickname for his lover Esther Vanhomrigh, derived from 'Van' from the Dutch surname Vanhomrigh and the feminine suffix '-essa', probably inspired by the first name Esther. She was fictionalized in Swift's poem Cadenus and Vanessa (1713), with Cadenus referring to himself, and the first name subsequently grew in popularity.

What are the Variant Forms of Vanessa?

Variant forms share both the origin and meaning of Vanessa.

Vanessa is a popular baby girl name. The name's popularity increased from the 1940s up to the 1980s; before that, it was of only very light use. At the modest height of its usage in 1985, 0.410% of baby girls were named Vanessa. It had a ranking of #42 then. The baby name has seen a decline in popularity since then. In 2018, it ranked at #230 with a usage of 0.074%, but it was nevertheless the most popular within all girl names in its family. Vanessa was 5 times more frequently used than the subsequent ranked name, Janessa, in 2018. 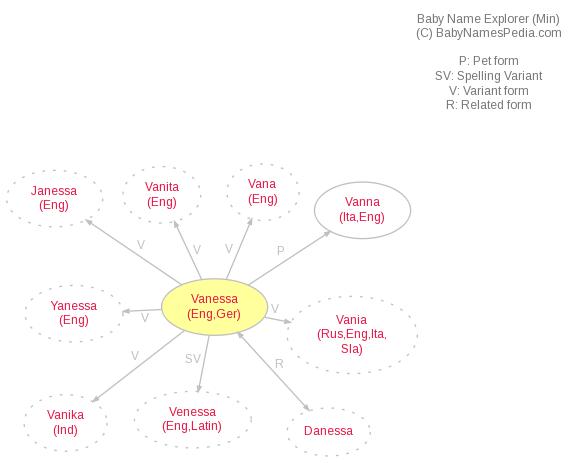