What does Veit mean?

Veit is used predominantly in the German language and it is derived from Latin origins. It is derived from the element 'vita' meaning life. Vitus (Latin) is an older form of Veit. The name has been confused with Germanic Wido since the early times. It was borne by Saint Vitus (290-303), a child saint from Sicily martyred under Diocletian and Maximian; he is one of the 14 Holy Helpers of the Roman Catholic Church. The name Vita (English, German, and Scandinavian) is the female version of Veit.

Veit's language of origin is Germanic. It is derived from the elements 'wit' meaning wide ; 'witu' wood, forest. Wido (Germanic) is an older form of Veit. Wido first developed as a short form of other Germanic names starting with the element 'wit' or 'witu' (meaning wood, forest); it has since the early times been confused with the Latin Vitus. The name Vita (English, German, and Scandinavian) is the female equivalent of Veit.

In addition, Veit is a variant (Dutch) of the name Guy (English and French).

Veit is unusual as a baby name for boys. It is listed outside of the top 1000 names. 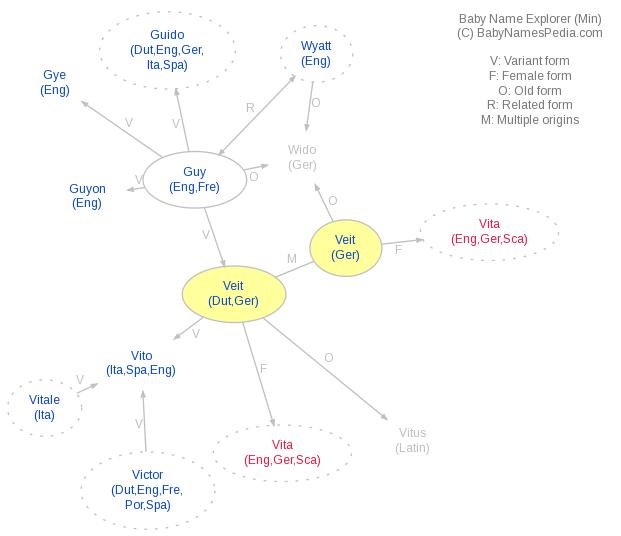