What does Venetia mean?

[ 3 syll. ve-ne-tia, ven-et-ia ] The baby girl name Venetia is pronounced as Vah-NIY-SHaa †. Venetia is primarily used in the English language, and its language of origin is Welsh and Latin. This is the Latin name for the city of Venice; it has also been associated with the name of the Roman goddess of love, Venus. Another derivation suggests that the name is altered from Gwyneth. The name was first made famous by the noblewoman and famed beauty Venetia Stanley (1600-1633), who married her childhood friend Sir Kenelm Digby against his family's wishes. Her premature death at the age of 33 immortalized her in various literary works by poets such as Ben Jonson. The name was later popularized by Benjamin Disraeli's novel Venetia (1837).

Venetia is a form of the English and Welsh name Gwyneth.

Venetia is also a form of the English name Venice.

Venetia is also a form of the Dutch, English, Finnish, German, Scandinavian, and Spanish name Venus.

Variant forms inherit both the origin and meaning of the name Venetia.

Venetia is unusual as a baby name for girls. It is ranked outside of the top 1000 names. 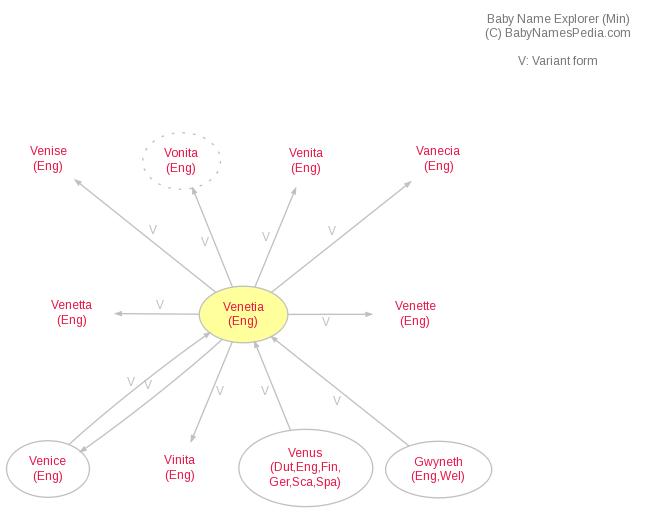