What does Vera mean?

Vera is used predominantly in the Armenian, Czech, English, German, Russian, and Scandinavian languages. It is derived from Latin origins. The name can be derived from the Latin 'verus'. It was first adopted by English speakers in the late 19th century, its popularity enhanced by the appearance of the name for characters in a few literary works including the Ouida novel Moths (1880), and the Elizabeth von Arnim novel Vera (1921).

The name Vera is widely used; it has 35 variations that are used in English and other languages. Variations of Vera used in English include Lavera, Vara, Vareena, Varena, Veira, Verah, Verda, Verdell, Vere, Verena, Verene, Verina, Verine, Verla, Verlene, Verra, Vjera, Vyra, and Weera. The diminutive Verdie is another English variation.

Both the origin and meaning of Vera is inherited by all variant forms.

Vera's origin is Russian. It is from the word viera meaning 'faith'. The name can also be derived from the Russian 'viera'.

Vera is mainly used in the Ukrainian language and it is also of Ukrainian origin. Meaning: faith.

Vera's origin, as well as its use, is in the Albanian language. It is derived from the word 'verë' which means summer.

In addition, Vera is a diminutive (Czech, Dutch, English, German, Hungarian, Italian, Russian, Scandinavian, and Slavic) of the name Guinevere (English and French).

Vera is a popular baby girl name, and it is also viewed as trendy. At the modest peak of its usage in 1906, 0.346% of baby girls were given the name Vera. It had a ranking of #68 then. The baby name has steeply declined in popularity since then. In 2018, its usage was 0.068% and its ranking #257, appearing with somewhat increasing regularity in the recent decade. Out of all girl names in its family, Vera was the most popular. In 2018, Vera was 43% more popular than the subsequent ranked name, Veronica. 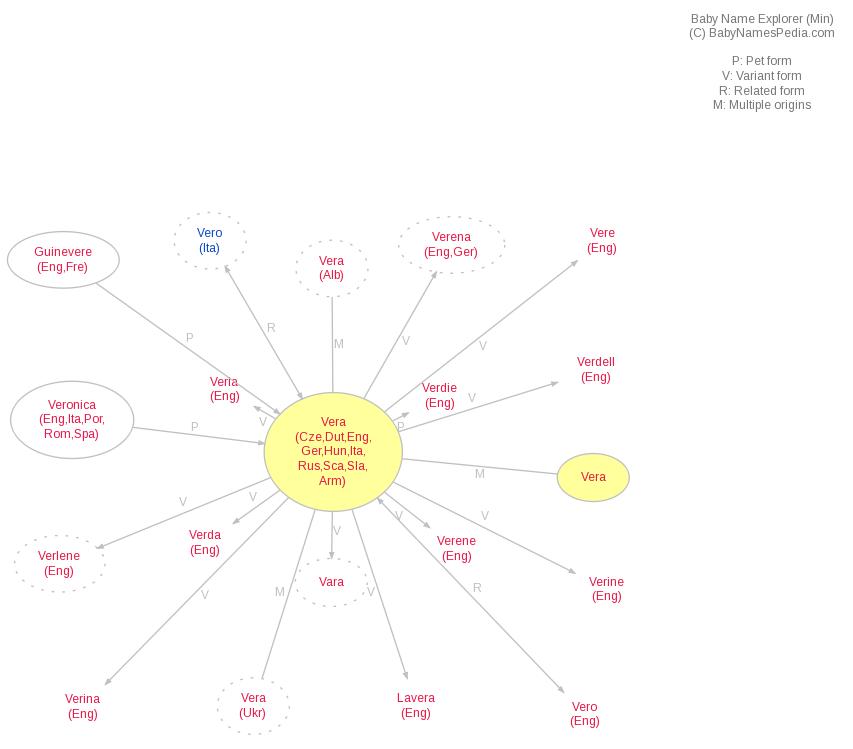