What does Veronica mean?

[ 4 syll. ve-ro-ni-ca, ver-on-ica ] The baby girl name Veronica is pronounced Vah-RAAN-ih-Kah in English †. Veronica is of Old Greek origin, and it is used mainly in the English, Italian, Portuguese, Romanian, and Spanish languages. The name's meaning is 'bearer of victory, true image'. It is a biblical name derived from phero meaning 'to bear, to carry' ; nike 'victory' ; verus 'true' ; icon 'image'. The name could be from the Latinized form of Berenike (Macedonian), which is from Pherenike (Old Greek), of the elements phero (meaning 'to bear, to carry') and nike, or else according to folk etymology it could be from the Latin 'vera icon' meaning 'true image', formed from the Latin 'vera' and the Greek icon. The name was borne by Saint Veronica, a pious woman of Jerusalem who wiped Jesus' face on the way to the crucifixion; according to legend, which could have been invented to explain the folk etymology, the cloth was left with an imprint of Jesus' face. The name was introduced from France into Scotland in the 17th century, and it was adopted in England by the end of the 19th century.

In addition, Veronica is an English, Italian, Portuguese, Romanian, and Spanish form of the English, French, German, and Italian Berenice.

What are the Variant Forms of Veronica?

Veronica is a widely used name; it has 68 forms that are used in English and foreign languages. Forms used in English include Berenike (used in Greek too), Bernice, Beronica, Nika (used in Russian too), Ronka, Ronnica, Varonika, Veera, Veira, Veranique, Verenice (used in French too), Verhonica, Verinica, Vernice, Vernika, Verohnica, Veron, Verona (used in Czech and German too), Veronicah, Veronicca, Veronice, Veronicha, Veronick, Veronicka, Veronika (used in Czech, German, and Scandinavian too), Veronike (used in French and German too), Veroniqua, Veronkia, Veronnica, and Veruka. Other English forms include the contractions Ron, Ronica, Vero, and Veronic, the diminutive forms Ranna, Roni (used in Hebrew too), Ronna, Ronni, Ronnie, Ronny, Vera (used in Czech, Dutch, German, Hungarian, Italian, Russian, Scandinavian, and Slavic too), and Vonnie, and the variant spellings Varonica and Vironica.

Veronica is an all-time favorite. Currently it is still fairly popular as a baby name for girls, though not to the extent it was previously. The name jumped in popularity from the 1930s up to the 1970s. At the modest height of its usage in 1974, 0.270% of baby girls were given the name Veronica. It ranked at #71 then. The baby name has since experienced a decline in frequency. In 2018, it ranked at #357 with a usage of only 0.048%. Within the group of girl names directly linked to Veronica, Vera was the most frequently used. It was used 43% more than Veronica in 2018. 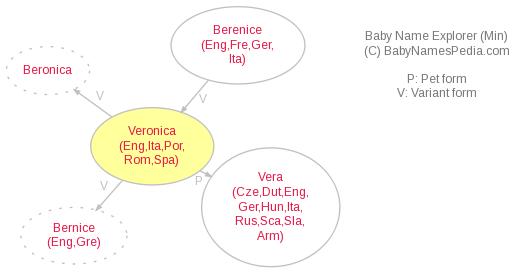