What does Victor mean?

[ 2 syll. vic-tor, vi-ct-or ] The baby boy name Victor is pronounced as VIHK-TahR (English) or ViyK-TOWR (French) †. Victor is largely used in the Dutch, English, French, Portuguese, and Spanish languages, and it is derived from Latin origins. It is derived from the element 'victoris' which means conqueror. Victorius (Latin) is an old form of Victor. The name was popular among early Christians for its association with Christ's victory over sin and death; it was borne by several saints and at least 3 popes. The name was not used much by the medieval period, but after the accession of Queen Victoria (1819-1901) in 1837, it grew increasingly popular in 19th century England as a name bestowed in honor of the queen, who got the name from her German mother Princess Maria Louise Victoria of Saxe-Coburg and Gotha. The name Victoria (English, German, Romanian, and Spanish) is the female equivalent of Victor.

The name Victor is widely used; it has 45 variants that are used in English and other languages. Variants used in English include Vick, Vicq, Victa, Victorien, Victorius, Victoro, Vidor, Viko, Viktor (also used in Czech, Dutch, German, Hungarian, Polish, Russian, Scandinavian, and Slavic), Viktorus, Vitorio, Vittorino, Vittorios, Vyctor, and Wictor. The contraction Vic, the pet form Tory, and the variant spelling Victer are other English forms.

Victor is a classic favorite. Currently it is still a popular baby name for boys, though it was in more widespread use before. At the modest peak of its usage in 1918, 0.304% of baby boys were given the name Victor. Its ranking then was #63. The baby name has since experienced a loss in popularity, and is now of occasional use. In 2018, its usage was 0.115% and its ranking #177, but it was nonetheless the most frequently used out of all boy names in its group. 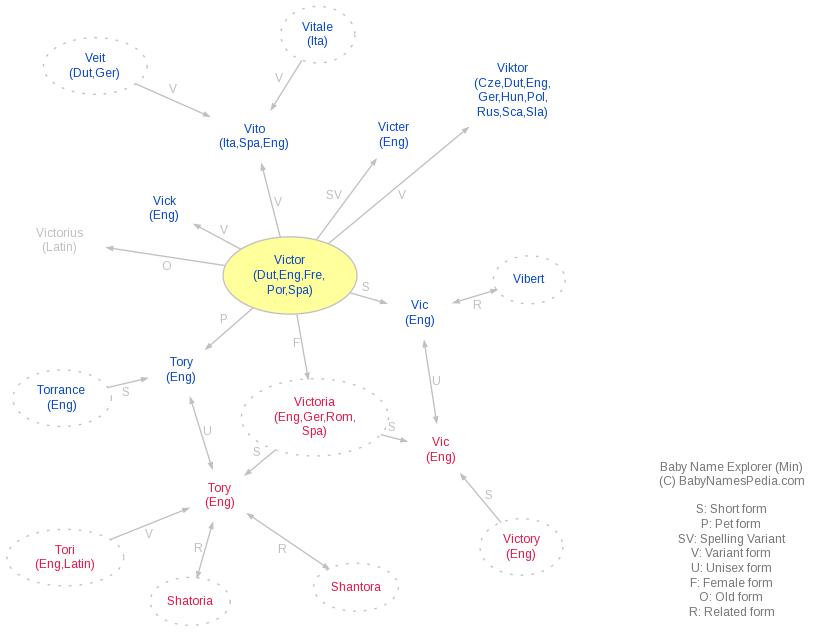