What does Victoria mean?

[ 4 syll. vic-to-ria, vi-ctor-ia ] The baby girl name Victoria is pronounced in English as VihK-TOWR-iy-ah †. Victoria has its origins in the Latin language. It is used largely in English, German, Romanian, and Spanish. The meaning of Victoria is 'victor, conqueror'. It is derived from victoria which means 'victory' ; victoris 'conqueror'. Victoria (Latin) is either directly from the Latin element victoria, or else it evolved as a feminine form of the personal name Victorius (Latin). It was borne in Roman mythology by the goddess and personification of victory. It was also borne by several saints. The first name was seldom used in England prior to the 19th century, but after the accession of Queen Victoria (1819-1901) in 1837, it grew increasingly popular in England as a name bestowed in honor of the queen, who got the name from her German mother Princess Maria Louise Victoria of Saxe-Coburg and Gotha. The Victorian era was named after the queen. Victoria is the feminine version of the Dutch, English, French, Portuguese, and Spanish Victor.

What are the Variant Forms of Victoria?

Victoria is very popular as a baby girl name, and it is also perceived as rather trendy. The name grew in popularity from the 1930s up to the 1990s. Its usage peaked in 1993 with 0.656% of baby girls being named Victoria. It was #19 in rank then. The baby name has experienced a drop in frequency since then. In 2018, it ranked at #21 with a usage of 0.384%, but it was nevertheless the most popular among all girl names in its family. Victoria was used 22 times more than the next ranked name, Tori, in 2018. 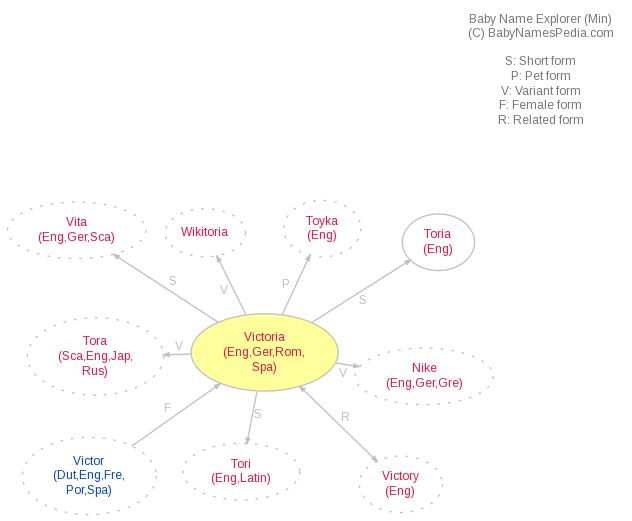