What does Vincent mean?

[ 2 syll. vin-cen(t), vi-nce-nt ] The baby boy name Vincent is pronounced as VIHN-SahNT (English) or VehN-SAON (French) †. Vincent is largely used in the Dutch, English, French, and Scandinavian languages, and it is derived from Latin origins. A biblical name, it is derived from the elements 'vincens' meaning winning, conquering ; 'vincere' to win, to conquer. Vincentius (Latin) is an old form of Vincent. The meaning of the name has sometimes been associated with the Christian concept of 'winning' or 'conquering' the sins of the world. The name was borne by various saints, the notable ones being Saint Vincent of Saragossa (-304), who was martyred under Diocletian, Saint Vincent of Lérins (-445), a Gallic writer of early Christian writings, and Saint Vincent de Paul (1581-1660), who founded numerous charitable organizations. The name was also borne by the famed Dutch Post-Impressionist artist Vincent Van Gogh (1853-90). The name was rather popular in the later Middle Ages, and it saw a revival in popularity among 19th century English speakers. The name Vinzentia (German) is the female equivalent of Vincent.

The name Vincent is used to a great extent; it has 58 variants that are used in English and other languages. Variants used in English include Bink, Vencent, Vicente (used in Portuguese and Spanish as well), Vicenzio, Vincence, Vincente (used in Italian, Portuguese, and Spanish as well), Vincentius, Vincents, Vincenzio, Vincien, Vincient, Vinciente, Vincint, Vinicent, Vinko, Vinn, Vinse, Vinsent, Vinsint, Vint, Vyncent, and Vyncynt. The contractions Vin (used in Latin as well) and Vince (used in Hungarian as well), and the diminutive forms Vinnie and Vinny are other English variants.

Vincent is a classic favorite. Currently it is still popular as a baby name for boys, though to a lesser extent than it was before. The name's popularity jumped from the 1900s up to the 1960s; before that, it was of occasional use only. At the modest peak of its usage in 1963, 0.298% of baby boys were given the name Vincent. It ranked at #60 then. The baby name has since declined in popularity. In 2018, its usage was 0.184% and its ranking #107, but it was nonetheless the most popular out of all boy names in its group. In 2018, Vincent was twice as popular as the next most popular name, Enzo. 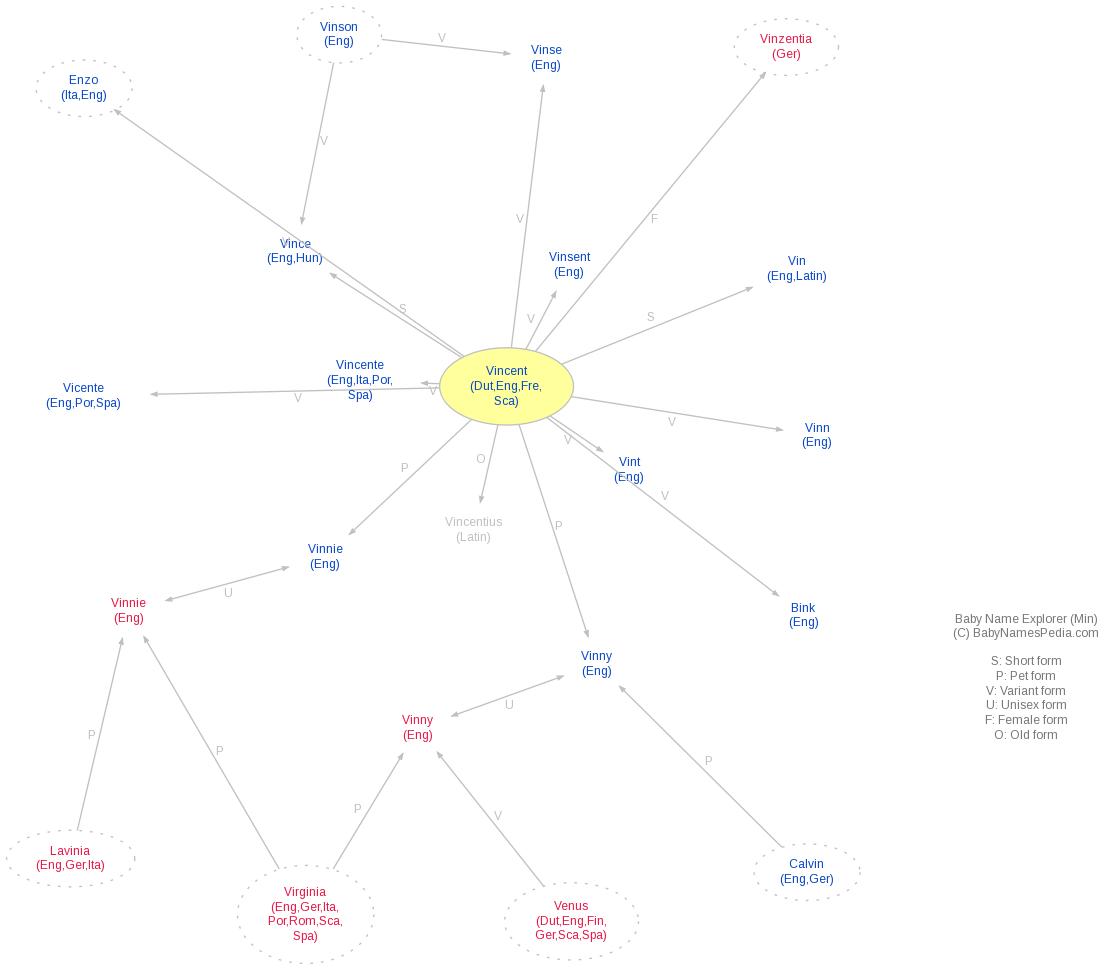