What does Viola mean?

[ 3 syll. vio-la, vi-ola ] The baby girl name Viola is pronounced Vay-OW-Lah or Viy-OW-Lah (English) †. Viola's language of origin is Latin and English, and it is predominantly used in English, German, Italian, and Scandinavian. Latin origin: It is derived literally from the word viola which is of the meaning 'violet'. The name was first popularized when Shakespeare used it for the heroine in his play Twelfth Night (1601). During the vogue for flower names in the late 19th century, the popularity of the name among English speakers was given a boost from its association with the ornamental flower.

Viola is a variation (Italian) of Violet (English).

The name Viola is widely used; it has 28 variations that are used in English and foreign languages. English variations include Violah, Violaina, Violaine, Violaney, Violani, Violanie, Violanta, Violante, Violanth, Violantha, Violanthe, Violany, Violeine, Vyoila, Vyola, Vyolani, Vyolania, Vyolanie, Vyolanya, and Yolande. Other English forms include the contracted form Vi (also used in French), the pet forms Violet, Violeta (also used in Spanish, Romanian, and Slavic), and Violette (also used in French), and the spelling variant Veola. Viole (French) and Wiola (Polish) are variations of Viola that are used in foreign languages. The pet form Violetta (Italian, French, and Russian) is another foreign variant.

Viola is a rare baby name for girls. At the peak of its usage in 1908, 0.554% of baby girls were named Viola. Its ranking then was #42. The baby name has since fallen from favor, and is currently of only infrequent use. In 2018, out of the group of girl names directly related to Viola, Violet was the most widely used. The name Viola has been predominantly given to baby girls, although it has also been used as a boy name in the past century. Viola as a baby girl name outnumbered its use as boy name by 62 times in 1902. 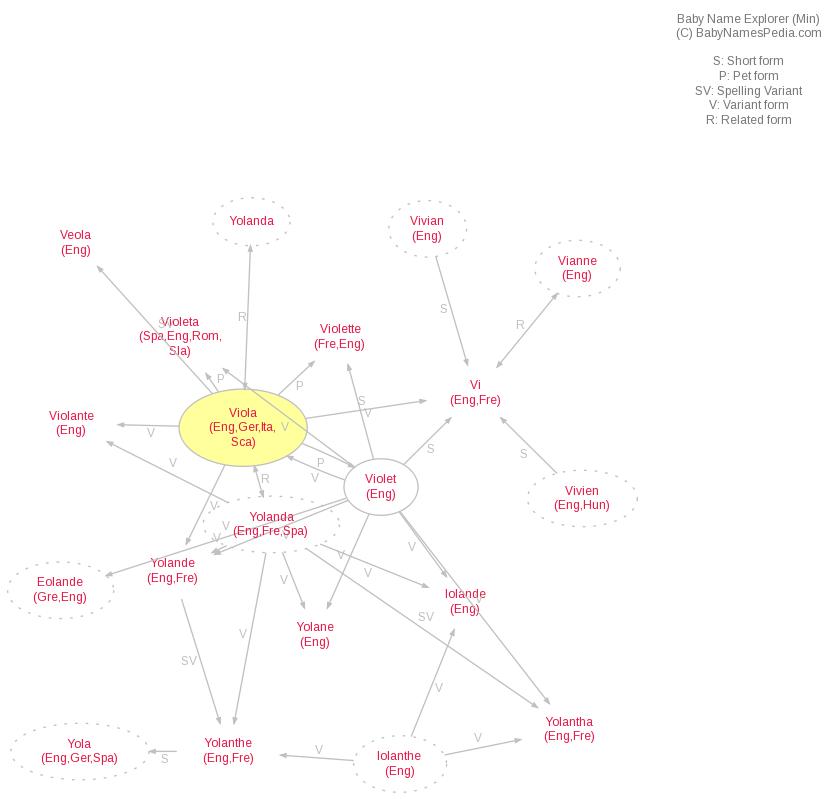