What does Waldemar mean?

[ 3 syll. wal-de-mar, wa-ldem-ar ] The baby boy name Waldemar is pronounced as VaaL-DEH-MaaR (German, Polish) †. Waldemar is primarily used in Dutch, German, Scandinavian, and Lithuanian. Its language of origin is Slavonic and Germanic. From Germanic roots, its meaning is power - in this context, Waldemar can be used in the Dutch, German, and Scandinavian languages. It is a two-element name derived from the words 'wald' and 'meri' which are of the meanings to rule and great, famous respectively. The name was borne by four Danish kings, including Waldemar the Great (1131-1182), whose reign saw the rise of Denmark.

In addition, Waldemar is a Dutch, German, and Scandinavian form of the Czech, English, and Hungarian name Vladimír.

Waldemar is also a Lithuanian form of the English, French, German, and Scandinavian name Walter.

Waldemar has 12 forms that are used in English and other languages. English forms of Waldemar include Valdemar (used in Czech and Scandinavian as well), Waldemare, Waldemarr, Waldermar, Waldmar, Weldemar, Weldemarr, Weldmar, and Weldmarr. Another English variant is the contracted form Waldo (used in German, and Italian as well). Forms used in other languages include Valdermar (Scandinavian) and Woldemar (Dutch, German, and Scandinavian).

See also the related forms, the German Walo and the German and Russian Wladimir.

Waldemar is a rare baby boy name. At the modest peak of its usage in 1906, 0.007% of baby boys were named Waldemar. It was #849 in rank then. The baby name has slipped in popularity since then, and is now of irregular use. In 2018, out of the family of boy names directly related to Waldemar, Walter was the most widely used. 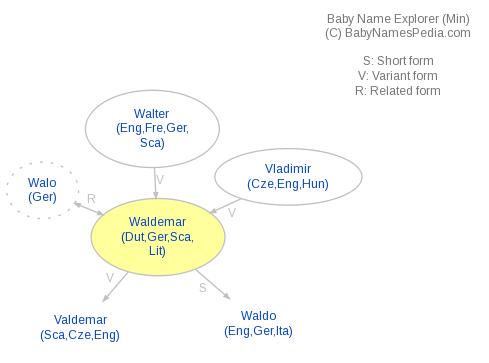