What does Walker mean?

[ 2 syll. wal-ker, wa-lk-er ] The baby boy name Walker is sometimes used as a girl name. It is pronounced as WAOLK-er or WAO-K-er †. Walker is used predominantly in the English language and its origin is Old English. It is from the elements 'wealcan' meaning to roll ; 'wealcian' to roll up. The first name is derived from the surname, which is itself from the medieval profession of a 'walker', someone who trod on woollen cloth in a special composite to thicken it and prepare it for use.

Walker is popular as a baby name for boys, and it is also viewed as trendy. The name's popularity has been growing since the 1980s. Its usage peaked modestly in 2018 with 0.069% of baby boys being given the name Walker. Its ranking then was #266. Among all boy names in its group, Walker was the most popular in 2018. Walker has in the past century been predominantly given to baby boys. 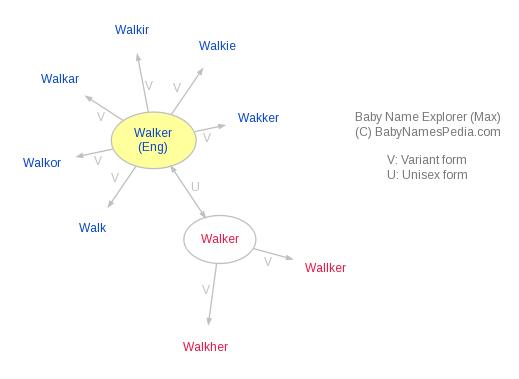