What does Wallace mean?

[ 2 syll. wal-la-ce, wa-ll-ace ] The baby boy name Wallace is pronounced WAA-LahS †. Wallace has its origins in the Old French language. It is used largely in English and Scottish. The name Wallace means 'Welshman'. It is from the word waleis with the meaning 'foreign, Celtic'. The first name is derived from the Scottish surname, which was originally a nickname given by Normans to minority Celtic people, such as Welshmen living around the border of England and Wales known as the Welsh Marches. The given name was first bestowed in Scotland, in honor of the Scottish patriot Sir William Wallace (1272/1276-1305) of Braveheart fame, who was executed by the English for his leading role in the wars of independence for his country. His name is sometimes spelt Walays or Wallensis (Latin), and his family may have originally come from Wales.

The name was later adopted by general English speakers in the 19th century. It is in modern times associated with the absent-minded character of the same name in Nick Park's animated series Wallace and Gromit (1990s). In England, the short form Wally is used as colloquial term for a young cucumber and also for an inept person; the latter use has possibly diminished the popularity of the short form of the name.

Wallace has 19 forms that are used in English and foreign languages. English forms of Wallace include Waleis, Wall, Wallache, Wallas, Wallase, Wallee, Walley, Walli, Wallie, Wallis, Walsh, Walshe, Welch, Welche, and Welsh. Other English forms include the shortenings Wal and Wally. Forms used in foreign languages include the Gaelic and Scottish Uallas and the German Wallach.

Wallace is an all-time favorite. Currently it is still somewhat popular as a baby boy name, but not to the degree it was previously. At the modest height of its usage in 1923, 0.247% of baby boys were named Wallace. It had a ranking of #69 then. The baby name has dropped out of favor since then, and it is of only sporadic use in recent times. In 2018, it ranked at #879 with a usage of 0.013%, but it was nevertheless the most popular within all boy names in its family. 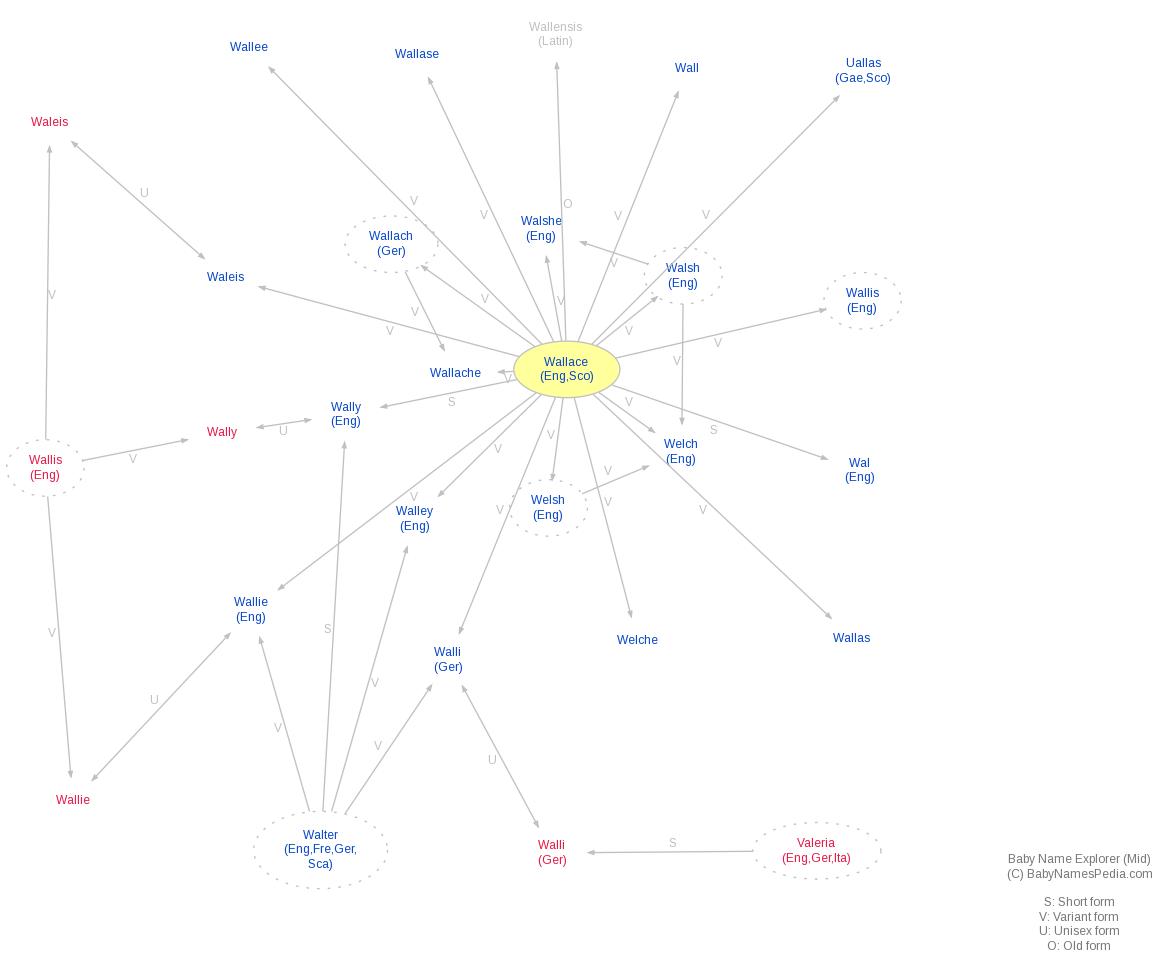