What does Walter mean?

[ 2 syll. wal-ter, wa-lt-er ] The baby boy name Walter is pronounced in English as WAOL-TahR or in German and Polish as VAAL-TehR †. Walter is primarily used in English, French, German, and Scandinavian, and its language of origin is Germanic. The name is from 'waldhar' (army ruler, folk ruler) which is itself of the elements 'wald' and 'heri' (meaning army, warrior). The Normans introduced it into England in the 11th century, replacing the form Wealdhere (Old English). The original pronuncation of the name Walter with a silent 'l' gave rise to various forms with a droppped 'l'. The name was borne by the famous German lyric poet Walther von der Vogelweide (1170-1230), the English explorer and writer Sir Walter Raleigh (1552-1618), and the prolific Scottish novelist Sir Walter Scott (1771-1832).

What are the Variant Forms of Walter?

The name Walter is widely used; it has 60 forms that are used in English and other languages. English forms include Walder, Walley, Wallie, Waltar, Walte, Walten, Walters, Walthar, Waltor, Waltur, Walty, Waltyr, Watson, and Woulter. Other English variants include the contracted forms Wally, Walt, and Wat, and the diminutive forms Watkin and Watt.

Walter is a classic favorite. Currently it is still a popular baby name for boys, though to a lesser extent than it was in the past, and it is also regarded as trendy. Its usage peaked in 1901 with 1.487% of baby boys being named Walter. It ranked at #12 then. The baby name has since steeply slipped in popularity. In 2018, its usage was 0.068% and its ranking #271, having regained its popularity somewhat in the recent decade. Among all boy names in its group, Walter was the most popular. In 2018, 4 times more boys were named Walter than the next ranked name, Watson. The name Walter has been mostly given to baby boys, though it has also been used as a girl name in the past century. In 1939, the name Walter was given to 144 times more baby boys than girls.

Baby names that sound like Walter include Walther, Valter, Voltaire, Valtteri, and Valtr. 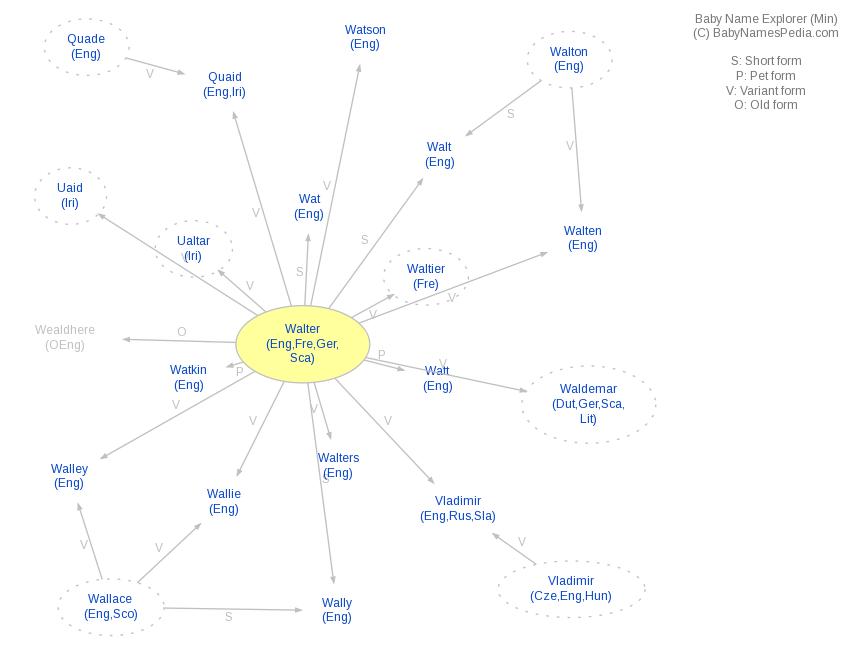