What does Wendy mean?

[ 2 syll. wen-dy, we-ndy ] The baby girl name Wendy is pronounced WEHNDiy- †. Wendy's language of origin is Welsh, Germanic, and English, and it is predominantly used in Dutch, English, and German. The name was invented by the Scottish novelist J.M. Barrie for his classic children story and play Peter Pan (1904). The name was inspired by a real girl Margaret Henley, daughter of his friend; Margaret used to call Barrie 'my fwendy wendy' meaning 'my friend'. When Margaret died at the age of four in 1894, Barrie immortalized her in the story. Some scholars have suggested that Wendy could have been used as a pet form of Gwenda prior to Barrie's work.

In addition, Wendy is a pet form (Dutch, English, and German) of Gwendolen (English and Welsh).

Wendy is also a pet form (Dutch, English, and German) of Wanda (English, German, and Polish).

Wendy is an all-time favorite. Today it is still a somewhat popular baby name for girls, though it was in more widespread use before. At the peak of its usage in 1967, 0.654% of baby girls were named Wendy. Its ranking then was #32. The baby name has since fallen from favor, and it is used only on a very light scale in recent times. In 2018, it ranked at #969 with a usage of 0.015%, but it was nevertheless the most commonly used out of all girl names in its group. 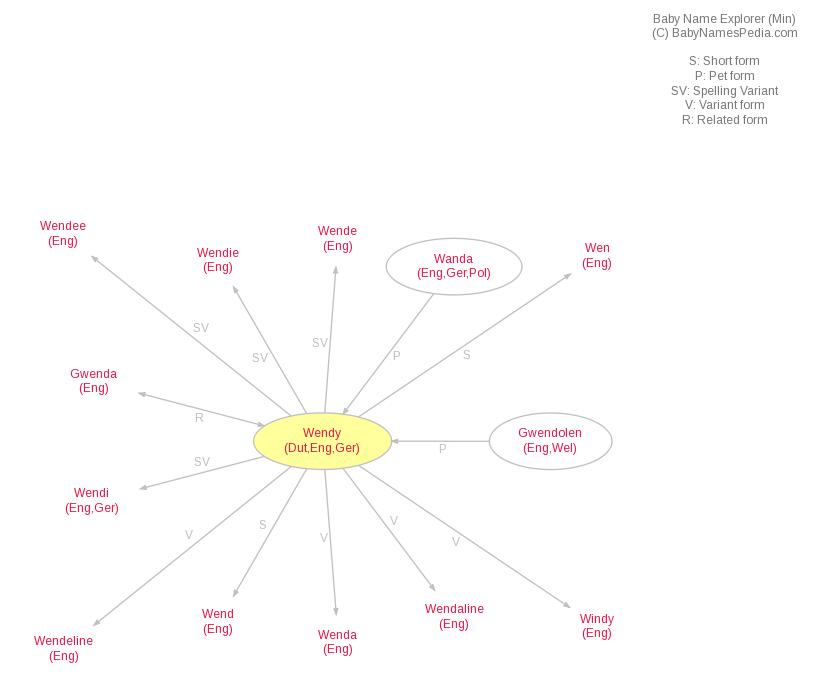