What does Werner mean?

[ 2 syll. wer-ner, we-rn-er ] The baby boy name Werner is sometimes used as a girl name. It is pronounced in Dutch as VEHR-NahR or WEHR-NahR or in German as VEHR-NehR †. Werner is used chiefly in the Dutch, English, German, and Scandinavian languages, and it is derived from Germanic origins. A two-element name, it is from the elements 'warin' meaning Warni, Warini, to protect ; 'heri' army, warrior. Guarin (Germanic), Warin (Germanic), Warinheri (Germanic), and Werinher (Germanic) are original forms of Werner. The first element of the given name is derived from a little known Germanic tribal name known as the Warni or Warini; the tribe existed before the 6th century. The tribal name originally meant 'to protect'.

Other forms of Werner include the diminutive forms Werni (German), Wessel (Dutch, Frisian, and German), and Wetzel (German), and the variant spelling Wernher (German).

Werner is unusual as a baby name for boys. Its usage peaked modestly in 1916 with 0.009% of baby boys being given the name Werner. It ranked at #671 then. The baby name has since declined in popularity, and is today of very light use. Among the group of boy names directly linked to Werner, Warren was the most frequently used in 2018. Werner has in the past century been mostly given to baby boys. 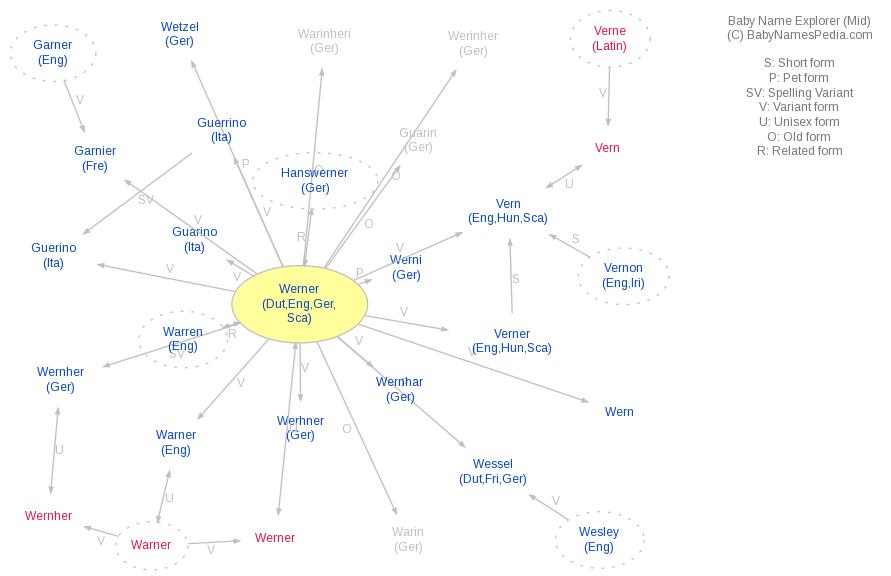