What does Wesley mean?

[ 2 syll. we-sley, wes-l-ey ] The baby boy name Wesley is pronounced WEHZLiy- or W-S-Liy- †. Wesley has its origins in the Old English language and it is used largely in English. The name Wesley means 'west wood, west clearing, west meadow'. It is from west ; leah meaning 'wood, clearing, meadow'. The first name is derived from the surname which is itself of a place name. The first name was initially bestowed in tribute to the Methodist founder John Wesley (1703-1791) and his brother Charles (1707-1788), especially among Methodists. Its use has since widened to the general English-speaking community.

Wesley is popular as a baby boy name, and it is also perceived as trendy. The name's popularity grew from the 1940s up to the 1970s. At the height of its usage in 1977, 0.252% of baby boys were named Wesley. It had a ranking of #66 then. The baby name has seen a decline in popularity since then. In 2018, it ranked at #105 with a usage of 0.187%, but it was nevertheless the most popular within all boy names in its family. Wesley was 13 times more frequently used than the subsequent ranked name, Westley, in 2018. 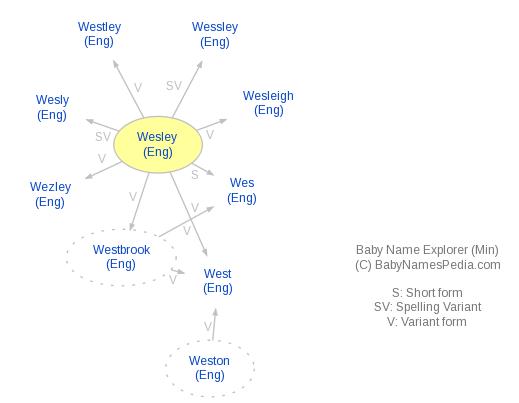