What does Whelan mean?

[ 2 syll. w-he-lan, wh-el-an ] The baby boy name Whelan is pronounced as WEHL-aeN or WEY-LaeN †. Whelan is used mostly in the English language and its language of origin is Celtic. The first name is derived from the Irish surname, which also occurs in various forms such as Wheelan, Whalen, Weallan, Welan, and Phelan. The surname is Anglicized from O' Faolán meaning 'descendant of Faolán'. This was the surname, which in Middle Irish was 'Úa Faeláin', of the early medieval ruling dynasty of the Déisi; they stayed in what is now the county of Waterford and south county Tipperary. Their descendants also lived in the counties of Kilkenny, Carlow, and Wexford.

In addition, Whelan is a derivative (English) of the English and Irish name Faolán.

The English name Whalen is a derivative of Whelan.

Whelan is an unusual baby name for boys. It is not ranked within the top 1000 names. 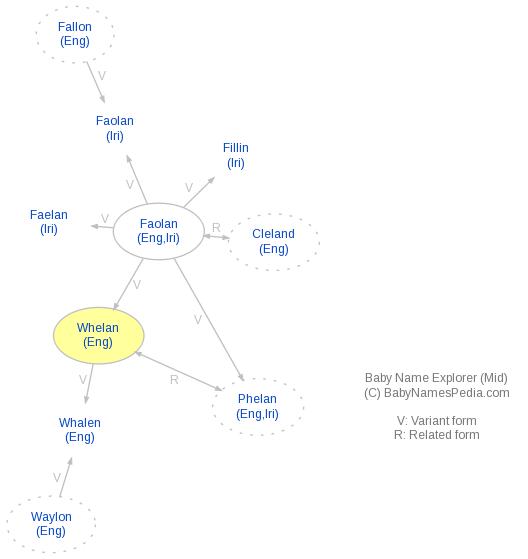