What does Whitney mean?

[ 2 syll. w-hi-tney, wh-itn-ey ] The baby girl name Whitney is also used as a boy name, though it is far more popular for girls. It is pronounced as W-IHTNiy- †. Whitney is of Old English origin and it is used mainly in English. The meaning of Whitney is 'white island'. It is derived from hwit which means 'white' ; ey 'island'. The first name is from the surname, which is itself from the Middle English phrase 'atten whiten ey' meaning 'by the white island'. The popularity of the name has been boosted by the famous American singer Whitney Houston (1964-); it has been popular among Afro-Americans.

Whitney is an all-time favorite. Currently it is still somewhat popular as a baby girl name, but not to the degree it was in the past. The name increased in popularity from the 1960s up to the 1980s; prior to that, it was of only sporadic use. Its usage peaked in 1986 with 0.517% of baby girls being named Whitney. It was #32 in rank then. The baby name has experienced a marked drop in frequency since then. In 2018, it ranked at #901 with a usage of 0.016%, but it was nevertheless the most frequently used among all girl names in its family. Although Whitney is today more frequently used for baby girls, there was a period from 1909 to 1961 when more boys were given the name. After 1962, increasingly the name became more popular with baby girls than with boys. In 1988, 70 times more baby girls than boys were given the name Whitney. 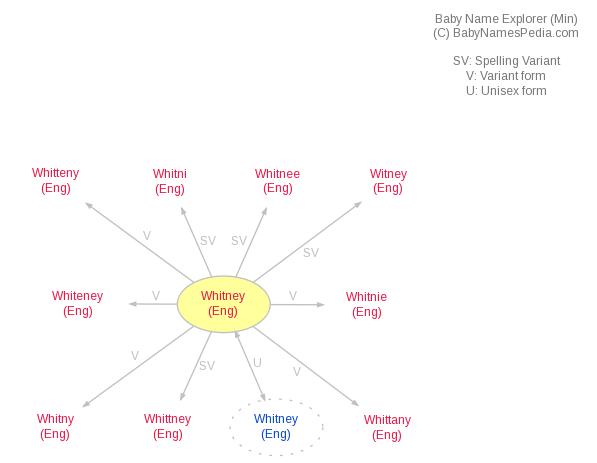