What does Wilbert mean?

[ 2 syll. wi-(l)ber(t), wil-be-rt ] The baby boy name Wilbert is pronounced WIHLB-erT †. Wilbert has its origins in the Germanic language. It is used largely in English and German. It is a two-element name derived from wil and berht with the meanings 'will, desire' and 'bright, famous' respectively.

Wilbert is a variant form of the English Wilbur.

Wilbert has 21 variant forms that are used in English and foreign languages. English variant forms of Wilbert include Wilbar, Wilbarn, Wilbart, Wilber, Wilbern, Wilbur, Wilburh, Wilburn, Wilburt, Wilperht, and Wylbert. Other English variant forms include the shortening Wil, and the diminutives Bert (also used in Dutch and Scandinavian), Bertie, Will, Willie, and Willy.

Wilbert is uncommon as a baby boy name. At the height of its usage in 1922, 0.080% of baby boys were named Wilbert. It had a ranking of #167 then. The baby name has dropped out of favor since then, and is used only on a very modest scale today. In 2018, within the family of boy names directly related to Wilbert, Will was the most widely used. 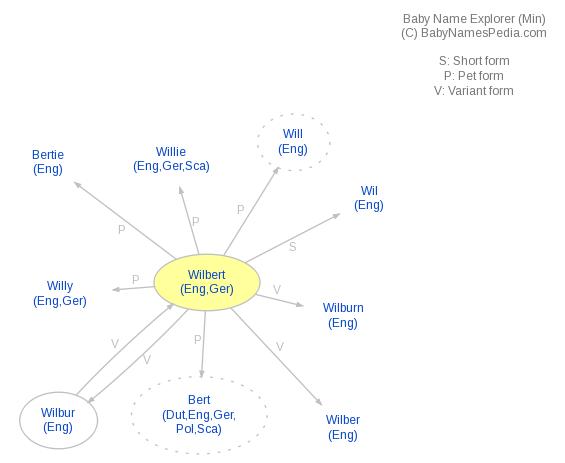