What does Wilfred mean?

[ 3 syll. wi-(l)fred, wil-fr-ed ] The baby boy name Wilfred is pronounced as WIHLFerahD †. Wilfred is used chiefly in the English language and it is derived from Germanic origins. The name's meaning is desiring peace. A two-element name, it is derived from the elements 'wil' meaning will, desire ; 'fridu' peace, protection, safety. Walfrid (Old English) and Wilfrith (Old English) are original forms of Wilfred. The name was borne by two saints, including Saint Wilfrid (634-709), an English bishop at the Council of Whitby. The name was not used much from the Middle Ages until after the Norman Conquest; it saw a revival in the 19th century. The name Wilfreda (English) is the female form of Wilfred.

Wilfred has 24 variants that are used in English and other languages. Variants used in English include Wifredo, Wilferd, Wilfredo (used in Italian and Spanish too), Wilfrid (used in French too), Wilfride, Wilfryd, Willfred, Willfredo, Willfrid, and Willfryd. Other English variants include the short forms Fred, Wil, Wilf, Wilfie, and Will, and the diminutive forms Freddie, Willie, and Willy.

Wilfred is unusual as a baby name for boys. Its usage peaked in 1917 with 0.081% of baby boys being given the name Wilfred. It ranked at #164 then. The baby name has since experienced a marked loss in popularity, and is today of very modest use. Among the group of boy names directly linked to Wilfred, Will was the most regularly used in 2018. 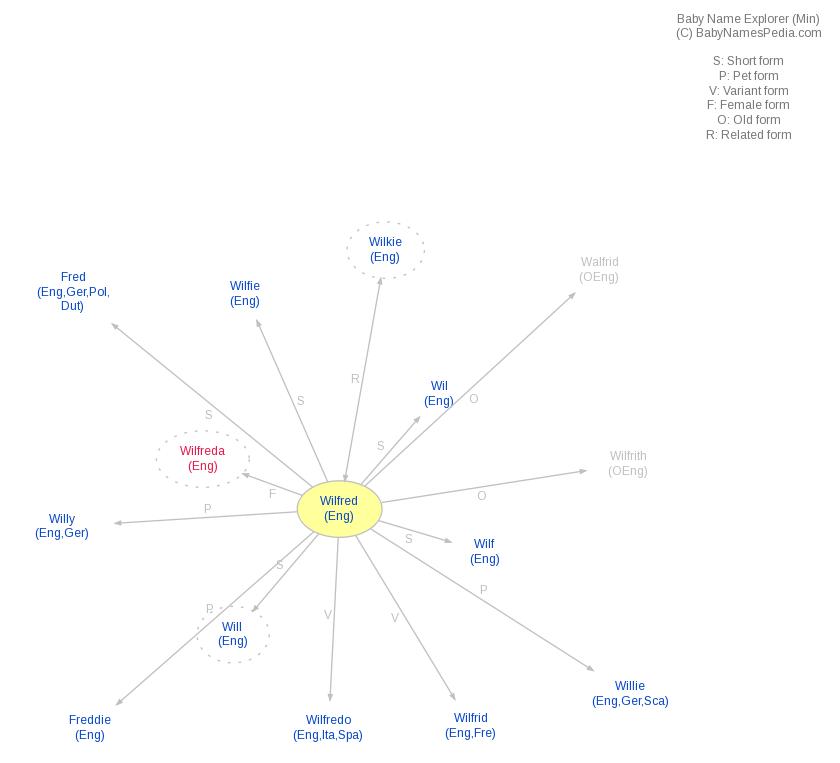