What does Wilkie mean?

[ 2 syll. wi-(l)kie, wil-k-ie ] The baby boy name Wilkie is pronounced as WIHLKiy †. Wilkie's language of origin is English and Germanic, and it is predominantly used in English. The first name is derived from the English surname, which is itself from the name Wilfred or William. The first name was adopted in the 19th century.

Wilkie is a derivative of the English and French William.

Derivatives of Wilkie include the names Wikie, Wilke, Wilkes, Willkes, and Willkie.

The origin and meaning of the name Wilkie is inherited by all variant forms.

Wilkie is an unusual baby name for boys. Its usage peaked modestly in 1940 with 0.005% of baby boys being named Wilkie. Its ranking then was #800. The baby name has since slipped in popularity, and is currently of only irregular use. In 2018, among the group of boy names directly related to Wilkie, William was the most popular. 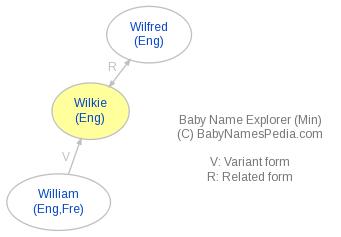