What does William mean?

[ 2 syll. wi-(l)liam, wil-li-am ] The baby boy name William is sometimes used as a girl name. Its pronunciation is WIHLYahM †. William is used chiefly in the English and French languages, and it is derived from Germanic origins. A two-element name, it is derived from the elements 'wil' meaning will, desire ; 'helm' helmet, protection. The name was introduced by the Normans into England. It was borne by William the Conqueror (1027-1087), the first Norman king of England. The name was adopted by the English after the conquest and became the most popular male name for a period in the Middle Ages before being overtaken by John. The name was borne by the famous English poet and playwright William Shakespeare (1564-1616). The name was also borne by members of royalty in Germany, Netherlands, Sicily, and Albania. It was also borne by numerous members of the British royal family, including Prince William (1982-). The name Wilhelmina (Dutch, English, German, and Polish) is the female form of William.

What are the Variant Forms of William?

William is a very popular baby name for boys. In 1900, 5.288% of baby boys were given the name William. Its ranking then was #2. The baby name has since fallen in popularity, and is today of moderate use. In 2018, its usage was only 0.753% and its ranking #3, but it was nonetheless the 2nd most popular after Liam, out of all boy names in its group. In 2018, it was 37% more commonly used than William. In the past century William has predominantly been a baby boy name. In 1987, baby boys named William outnumbered girls by 138 times. 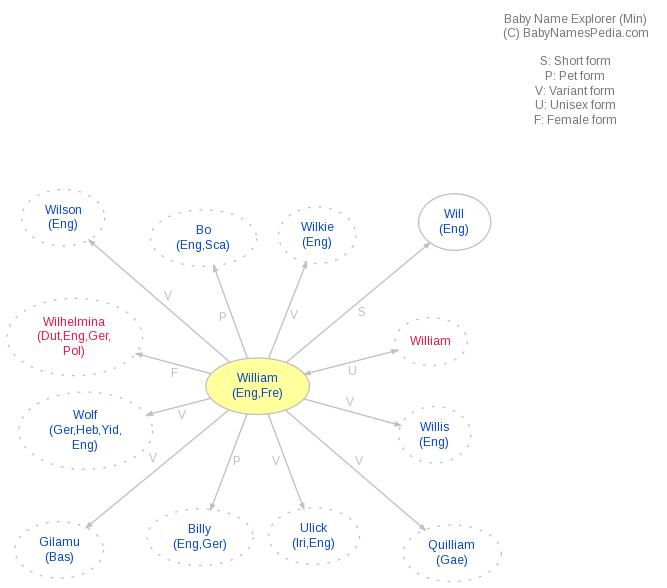