What does Winifred mean?

[ 3 syll. wi-ni-fred, win-ifr-ed ] The baby girl name Winifred is pronounced as WIHN-ih-FRehD †. Winifred is an English, German, and Welsh name of Old Welsh and Celtic origin. From Celtic roots, its meaning is blessed reconciliation, friend of peace. The name is from the Welsh Grenfrewi, of the elements 'gwen' (meaning white, fair, blessed, holy) and 'frewi', and modified via Gwinifrid and the Old English male name Winfrith, of the elements 'wynn' and 'frith' (peace, protection, safety). The name was borne by the 7th-century Saint Winifred or Gwenfrewi who resisted the advances of a Welsh prince who eventually beheaded her. The name is used as an Anglicized version of Úna in Ireland and Scotland.

In addition, Winifred is a variant form of the English and French name Guinevere.

Winifred is also a variant form of the Irish and Scottish name Úna in the English language.

Winifred is rare as a baby girl name. At the peak of its usage in 1917, 0.136% of baby girls were given the name Winifred. It had a ranking of #141 then. The baby name has suffered a marked decline in frequency since then, and is today used on a very modest scale. Out of all girl names in its family, Winifred was nonetheless the most widely used in 2018. Winifred has mainly been a girl name, though in the last century it has also been used for boys. There were 29 times more girls than boys who were named Winifred in 1918. 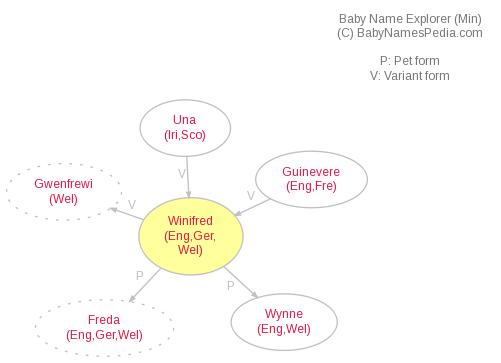