What does Winona mean?

[ 3 syll. wi-no-na, win-ona ] The baby girl name Winona is pronounced in English as Wih-NOWN-ah †. Winona's language of origin is Dakota, and it is used largely in the English and Sioux languages. It is derived literally from the word winona which means 'first-born daughter'. The name was borne by a legendary Sioux princess and heroine. The Dakota commonly name a firstborn girl Winona, and a firstborn boy Chaska. The name appeared in the Henry Wadsworth Longfellow epic poem The Song of Hiawatha (1855) as the mother of Hiawatha. The form Winona was first popularized by the H. L. Gordon poem Winona (1881). In recent times, the name has been made familiar by the actress Winona Ryder (1971-).

Winona is unusual as a baby name for girls. Its usage peaked modestly in 1931 with 0.023% of baby girls being given the name Winona. Its ranking then was #407. The baby name has since substantially declined in popularity, and is used only on an infrequent scale now. Among all girl names in its group, Winona was nonetheless the most popular in 2018. 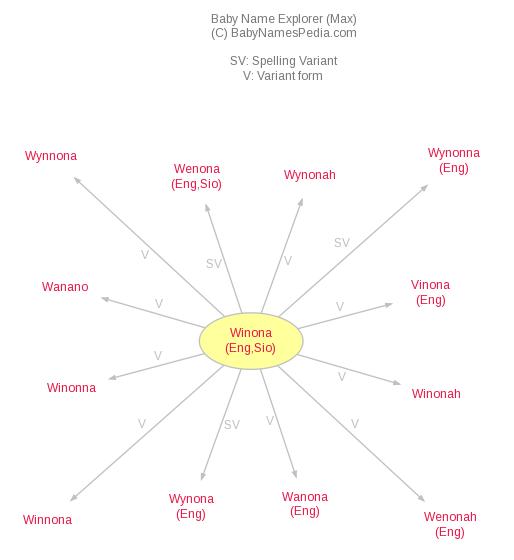