What does Xavier mean?

[ 4 syll. xa-vier, xav-i-er ] The baby boy name Xavier is sometimes used as a girl name. It is pronounced in English as ihG-ZEY-Viy-ahR, ZEY-Viy-ahR or ZEY-VYahR, or in French as Zae-VYEY †.

Xavier is used predominantly in the English, French, and Spanish languages, and it is derived from Basque origins. It is from the elements 'etche' meaning house ; 'berria' new. The name is either derived from a Basque place name, or else it could be of Arabic roots. The nickname was borne by Saint Francis Xavier (1506-1552), who acquired it from his birthplace at Xavier in Navarre. In this case, Xavier is possibly the Hispanic form of the Basque place name Etcheberria meaning 'the new house'. The saint is considered by the Roman Catholic Church as one of its most prolific missionaries. He spent much of his time in China, Japan, and India, and he is venerated as the patron saint of the Orient. The name first became popular in Catholic Spain and France due to the fame of the saint. Today, the name is still used mostly by Roman Catholics. It is often found as a second name, especially after Francis. In recent times, the fictional Professor Xavier of the X-Men (1963-) comics and films have made it better known. The name Xaviera (English and Spanish) is the female version of Xavier.

Xavier is of Arabic origin. The meaning here is bright, brilliant.

Xavier is a popular baby name for boys. The name's popularity rose from the 1940s up to the 2000s; before that, it was of irregular use only. At the modest peak of its usage in 2007, 0.296% of baby boys were given the name Xavier. Its ranking then was #68. The baby name has since experienced a loss in popularity. In 2018, its usage was 0.223% and its ranking #88, but it was nonetheless the most popular out of all boy names in its group. In 2018, Xavier was thrice as popular as the next most popular name, Javier. 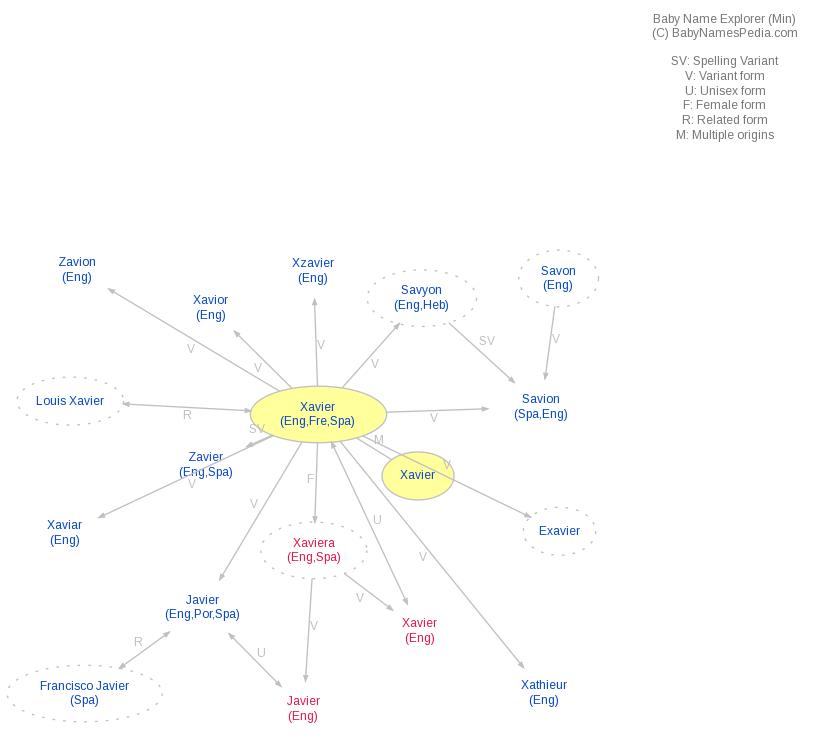