[ 3 syll. ya-du-raj, yad-ur-aj ] The baby boy name Yaduraj is pronounced as Yaa-DUW-Raaiy †. Yaduraj is used predominantly in Indian and it is derived from Sanskrit origins. The name Yaduraj means lord of the Yadu clan. In Hindu mythology, this is another name for Lord Krishna. In the Mahabharata, Yadu was the eldest son of king Yayati and queen Devayani; he was expelled from his father's kingdom for refusing to exchange his youth with his father. He later founded the Aryan clan of Yadu.

Yaduraj is a variation of the name Yadav (Indian).

Yaduraj is not commonly used as a baby boy name. It is not listed within the top 1000. 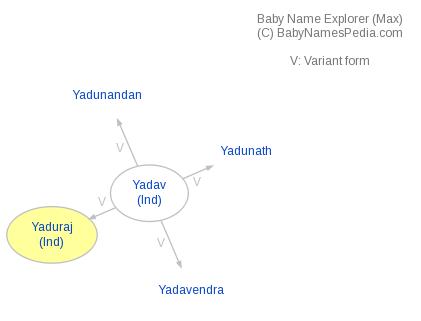