What does Yahaira mean?

[ syll. ya-hai-ra, yah-a-ira ] The baby girl name Yahaira is pronounced YAEHHEH-RAH †. Yahaira is of Hebrew and Native American origin. It is used mainly in Spanish and English. From Hebrew roots, its meaning is 'he enlightens, he shines' - in this context, Yahaira can be used in the Spanish language. It is derived from the word owr which is of the meaning 'to enlighten, to shine'. The name was popularized by a character bearing the name in the Venezuelan telenovela Esmeralda (1970s).

In addition, Yahaira is an English form of the Spanish Yajaira.

Yahaira is also a form of the Hebrew Yakira.

Yahaira is the feminine equivalent of the English Jair.

Forms of Yahaira include the names Yahara, Yahayra, and Yahira.

Other forms of the name include the diminutive Hara and the Spanish spelling variant Yajaira.

Yahaira is rare as a baby girl name. At the modest peak of its usage in 2005, 0.015% of baby girls were named Yahaira. It had a ranking of #823 then. The baby name has markedly slipped in popularity since then, and is used only on a very light scale now. Out of all girl names in its family, Yahaira was nevertheless the most frequently used in 2018. 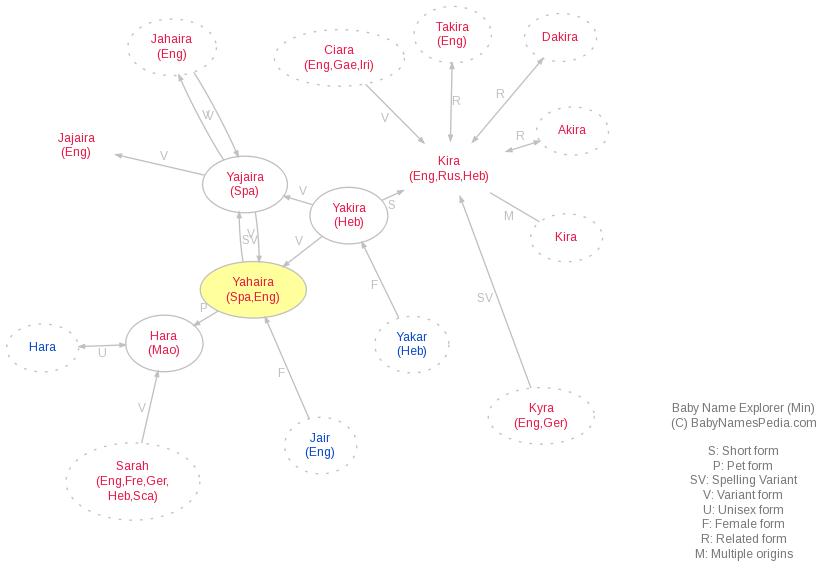