What does Yolanda mean?

Yolanda has its origins in the Old Greek language. It is used largely in English, French, and Spanish. The name Yolanda means 'violet flower'. The name is of debated origin. Its old form Yolande (Old French) was altered by association with the Greek elements iole and anthos beyond what was recognisable from possibly Germanic origins. Alternatively, the name could be of Latin origin.

What are the Variant Forms of Yolanda?

Yolanda's origin is Latin. It is derived from the word 'viola' which means violet. The source form Yolande (Old French) could have developed from Violante (Latin) and ultimately the element 'viola'. The name was borne by Yolanda of Flanders (1175-1219), an empress of the Latin Empire in Constantinople. Her descendants bore various forms of the name, such as Violante of Aragon (1252-1284) and Yolande of Montferrat (1274-1317). Another bearer was Saint Jolenta of Poland (1235-1298), whose name has also been translated as Helen.

Yolanda is rare as a baby girl name. At the modest peak of its usage in 1968, 0.216% of baby girls were given the name Yolanda. It was #93 in rank then. The baby name has substantially declined in popularity since then, and is today of infrequent use. Out of all girl names in its family, Yolanda was nonetheless the most widely used in 2018. 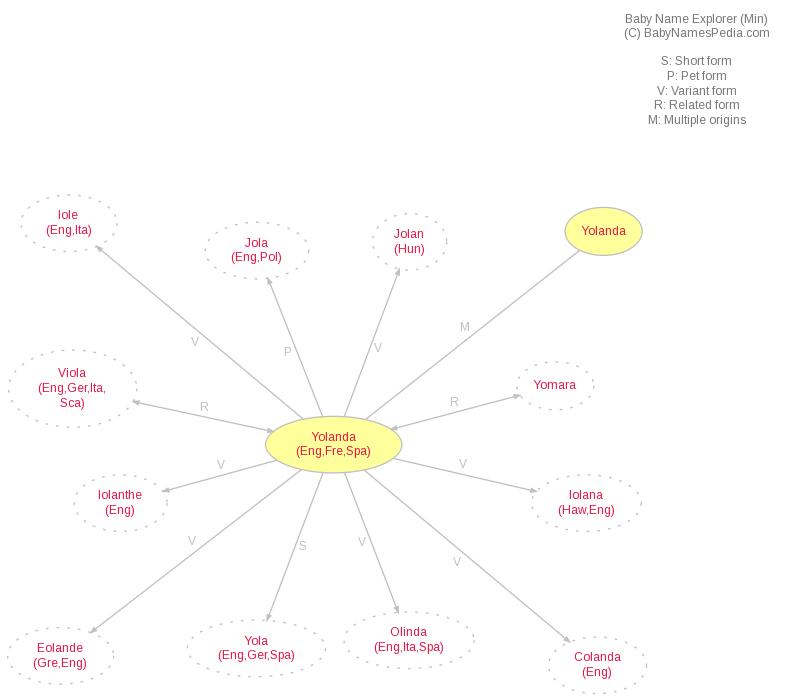