What does Zeno mean?

[ 2 syll. ze-no, zen-o ] The baby boy name Zeno is pronounced as ZIY-Now †. Zeno is used chiefly in the English, French, German, and Greek languages, and its origin is Old Greek and Indoeuropean. From Old Greek roots, its meaning is of Zeus. Zenon (Old Greek) is an original form of Zeno. Zenon is itself derived from the name of the Greek supreme god Zeus. Zeno is also used as the short form of various names starting with 'Zen-'. It was borne by four philosophers, Zeno of Elea (490-430 BC), who was known for his dialectic paradoxes, Zeno of Citium (333-264 BC), founder of the Stoics, the 3rd-century BC Zeno of Tarsus, an orthodox Stoic philosopher, and the 1st-century BC Zeno of Sidon, an Epicurean philosopher. The name was also borne by a 4th-century saint, Zeno of Verona, and a Byzantine emperor (425-491).

In addition, Zeno is a short form of the name Zenodoros.

Zeno is also a variant of the name Zeus (English and German) in the English language.

The name Zena is the female form of Zeno.

Zeno has 16 variants that are used in English and other languages. Variants used in English include Zenan, Zenas, Zenobio, Zenobios, Zenobo, Zenon (used in French, Greek, Polish, and Spanish as well), Zenos, Zenoviy, Zenus, Zino, and Zinoviy.

Zeno is unusual as a baby name for boys. Its usage peaked modestly in 1902 with 0.009% of baby boys being given the name Zeno. Its ranking then was #686. The baby name has since fallen in popularity, and is today of very light use. Among all boy names in its group, Zeno was nonetheless the most frequently used in 2018. 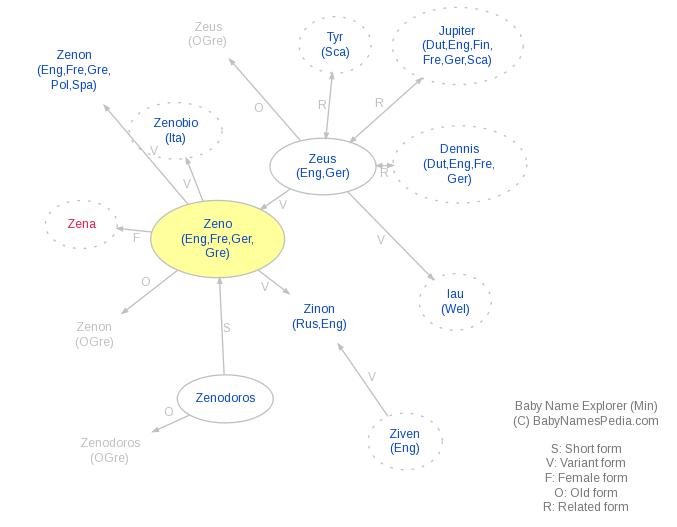