What does Zoe mean?

[ 2 syll. zoe, zo-e ] The baby girl name Zoe is also used as a boy name, though it is far more popular for girls. It is pronounced in English as ZOW-iy †. Zoe has its origins in the Old Greek language. It is used largely in English, German, Greek, and Polish. It is derived literally from the word zoe which is of the meaning 'life'. The name was adopted by Greek speakers as a form of Eve, due to the similarity in meaning. It appeared in place of Eve in versions of the Bible translated by the Alexandrian Jews. It was conseqently adopted by early Christians, both as a biblical name and for the associations of its meaning with the notion of eternal life. The name was borne by two early saints, as well as two Byzantine empresses in the 10th and 11th centuries. English speakers first adopted the name in the 19th century, promoted by the Geraldine Jewsbury novel 'Zoe, A History of Two Lives' (1845). Zoe is the feminine equivalent of the English Zoilo.

The name Zoe is used to a great extent; it has 26 forms that are used in English and foreign languages. English forms of the name include Zoanne, Zoee, Zoel, Zoeline, Zoelle, Zoë (used in Dutch too), Zoia, Zooey, Zowe, Zowey, Zowie, Zoy, Zoyara, Zoye, Zoyechka, Zoyenka, and Zoyya. Other English forms include the spelling variants Zoey, Zoi, and Zoie. 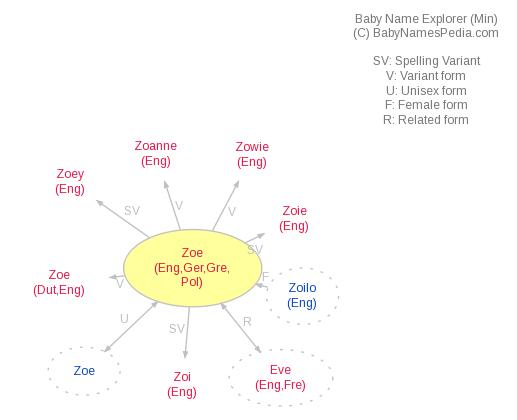