What does Zola mean?

[ 2 syll. zo-la, zol-a ] The baby girl name Zola is also used as a boy name, though it is far more popular for girls. It is pronounced ZowLaa- †. Zola is of Italian origin. It is used mainly in English and Italian. The name Zola means 'lump of earth'.

Zola is an all-time favorite. Currently it is still somewhat popular as a baby girl name, but not to the degree it was previously. At the height of its usage in 1903, 0.023% of baby girls were named Zola. It had a ranking of #399 then. The baby name has fallen out of favor since then, and in recent times it is used only on a very modest scale. In 2018, it ranked at #956 with a usage of 0.015%, but it was nevertheless the most regularly used within all girl names in its family. Zola has in the last century been mainly given to baby girls. 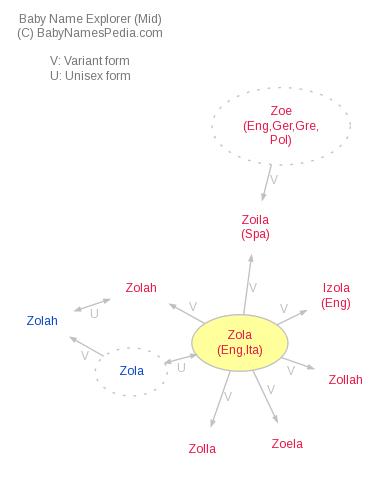